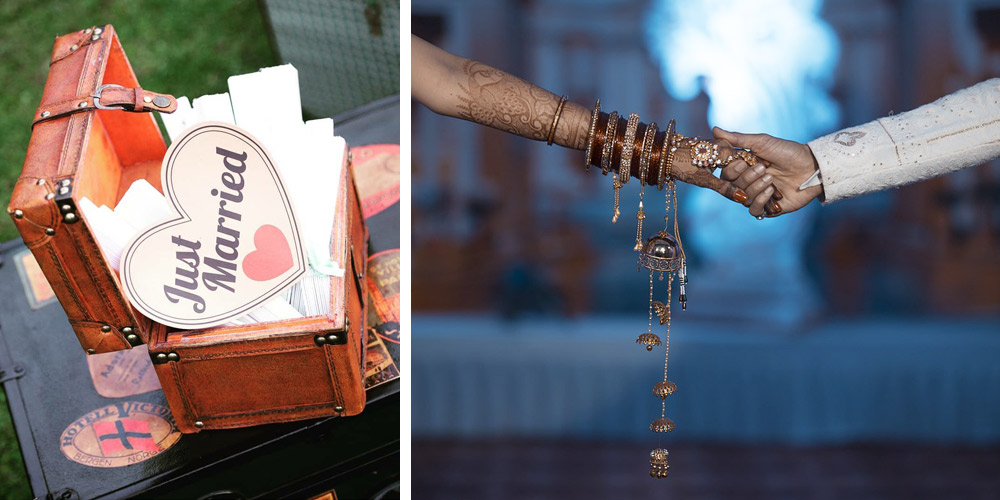 Weddings around the world: wedding customs and traditions

In every corner of the world, it is possible to discover age-old traditions and curious customs associated with weddings. Did you know that in some cultures, it is customary to break dishes to wish the bride and groom prosperity?

Follow us on this journey around the world to discover some of the customs and traditions associated with marriage.

In Greece, it is customary for brides to put a sugar cube in their glove to make the wedding sweeter. The Hellenic tradition includes breaking dishes as a symbol of abundance and an expression of kefi, the spirit of passion and enthusiasm that animates moments of celebration. This custom, also practised during artists’ performances, is now largely discouraged, to avoid possible accidents caused by shards of pottery and bad aim on the part of the guests.  However, some venues require a special licence to offer this kind of experience to tourists. For travellers wishing to immerse themselves in the local culture, the island of Santorini has even devised an interactive performance (the Greek Wedding Show), through which musicians, actors and dancers bring to life the atmosphere of a typical 1940s Greek wedding.

The custom of breaking plates, to wish abundance and fertility to the bride and groom, is also practised in Sardinia, where this suggestive ritual is known as sa ratzia. The pottery, before being smashed at the bride’s feet, is sprinkled with petals, wheat, rice, sugared almonds, candies and coins, symbols of prosperity that become a small “loot” for the children taking part in the celebration.

In Morocco, wedding celebrations last up to three days. The celebrations begin with the purification ritual at the hammam, during which the bride is visited by her friends and close relatives. On the second day, the hands and feet are decorated with henna tattoos with geometric motifs and a symbolic character.  At the actual wedding, the bride, dressed in the traditional white tachcita, arrives in a rich sedan-chair called an amaria, carried on the shoulders of 4 to 6 men. With the help of the neggafate, a group of women specially hired by the family, she changes clothes several times during the celebrations. The celebrations end with a visit to the groom’s parents’ house, during which the couple receives milk and dates as a sign of good luck.

Rich in colours, sounds and scents, traditional Indian weddings take place over three days. The entire ritual involves three different ceremonies: the Misri, the Sangeet and the Mehendi. The Misri ceremony is held several days before the wedding and takes its name from the sugar crystals that the groom’s parents bring as a gift to their future daughter-in-law to mark the sweetness of the marriage.  The women’s Mehendi ceremony is held a day or two before the wedding. The bride’s hands and feet are decorated with henna tattoos, depicting the depth of the bond between husband and wife. On the same evening, the ritual of the Sangeet takes place, in which the families of the bride and groom come together to celebrate and socialise, through song and dance that lasts well into the night.

In a Hindu wedding, the bride’s attire consists of 16 elements, including make-up and jewellery. The wedding sari is made of silk and the colour varies according to the region. The prevailing tones are red, yellow and orange, which are further enhanced by gold jewellery. The couple is united in marriage under the mandap, an ornate canopy that the groom, according to tradition, should reach on horseback or on an elephant. The centrepiece of the ceremony is the sacred fire (agni), around which various rituals are performed. To testify to the indissolubility of the bond, the husband gives his wife the mangalsutra, a necklace with two pendants that is attached to the bride’s neck with three knots.

Fascinating, isn’t it? In the next article, we will reveal some more interesting facts about marriage, through some typical customs of the Nordic culture and the Anglo-Saxon tradition.